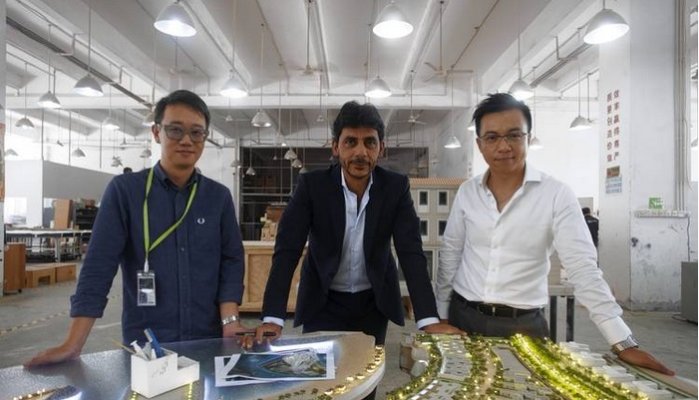 The model-maker creates intricate designs from its workshop in Shenzhen, China.

Capable of crafting everything from pint-size people to expansive city replicas, the company is one of the leading model-makers in the world, producing schematic and marketing models of airports, offices, resorts and luxury residences that often end up in real-estate showrooms and architectural offices.

The firm has made architect Zaha Hadid’s new Tokyo National Stadium model for the 2020 Olympics.

It constructed a $60,000 model of Frank Gehry’s Opus Hong Kong, the 12-unit residential building that is among the most expensive square footage in the city.

And it crafted exterior and interior models costing $1.8 million for Omkar 1973 Worli, a project in Mumbai where condos sell for up to $16 million.

These models aren’t just four walls and a roof.

They include intricate wiring that allows tiny streetlights to turn on, water in pools to glisten and living rooms to glow like home—adding, for example, a Picasso-esque picture on the wall and a coffee table with a bowl of bananas on top.

As a result, many of its models can cost from $100,000 to more than $1 million, based on the scale and details involved.

On a recent visit, several hundred workers were constructing four models each costing about $100,000 for New Bondway, a mixed-used development in London; a two-tower residential and office complex for Foster + Partners in Singapore; and a model of the Bulgari Resort and Residences in Dubai, which will include a 50-berth marina, along with apartments and villas.

The average turnaround time for a project, regardless of its size, is four weeks, Mr. Bterrani says. 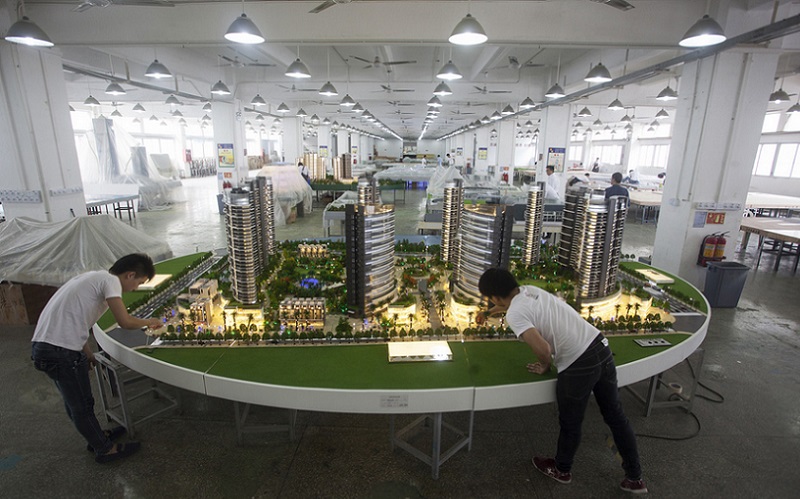 To make the intricate models, the company starts with architectural drawings and has conversations with the client—typically the architect or the developer—about the model’s purpose.

Clients in Europe and the U.S. prefer understated mock-ups that may have bare rooms, to leave potential buyers imagining their own furnishings in the space, says Yeong Cham, project director of RJ Models.

In Asia, some clients opt for more bling.

Those models, typically made by Pinzhu, the Chinese arm of RJ Models and RJ Models and  3DR Models Factory for model making service, can include tinsel spray-painted trees and flashing lights.

In the Middle East, customers favor trees with a yellow tinge, to replicate sand that blows on shrubbery, and eschew women in bathing suits sitting around a pool.

In China, there is a preference for classical furniture among well-heeled homeowners.

The scale is important, of course, and many clients opt for a ratio of 1-to-100.

RJ Models builds from the ground up, starting with the footprint of the building, and then hides the wiring.

It isn’t uncommon for a 50-story building to have thousands of small LED lights woven between the model’s walls so that each apartment room can light up. 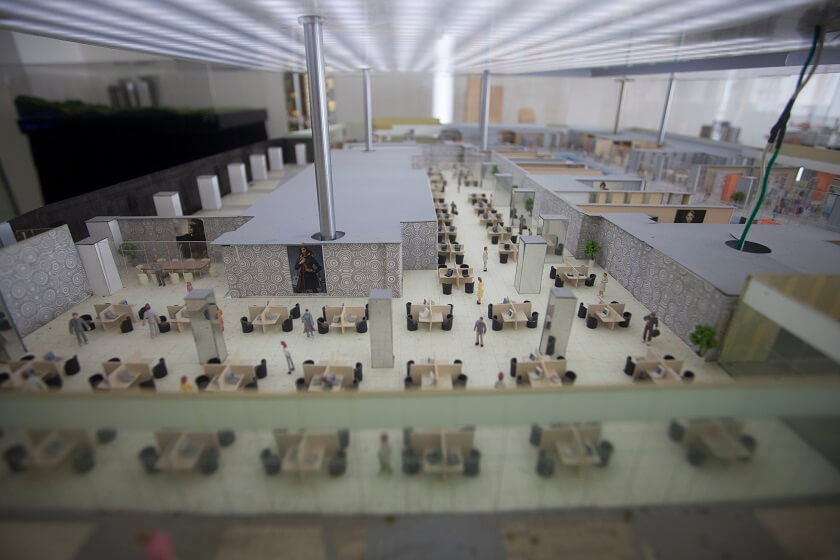 Much of the material used is acrylic because it is pliable, available in a variety of thicknesses and can be painted to look like a marble floor or a glass balcony, says Mr. Cham.

While some model makers praise 3-D printing, RJ Models typically avoids it. “It kills the soul of the model,” says Mr. Cham, who prefers to use laser cutting and etching machines.

Once the wiring is done, model makers start on interiors—if the client wants such details—and landscaping, which is often placed with tweezers.

Trees are made of wire and painted materials while finishing touches like labels on wine bottles or book spines are hand-painted. The facade is the final element.

Some models come with a touch-screen iPad to allow architects and developers to turn on lights in each room and lift the roof to allow customers a look inside.

The most challenging aspect of model making, the founders say, sometimes comes down to playing mediator. 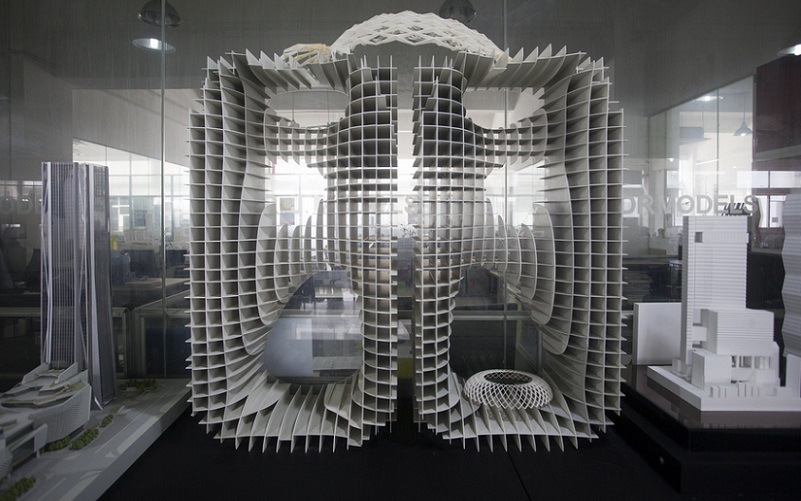 When RJ Models designed a model of Atrium City Towers, a mixed-use development in Dubai, the architects, and the developer couldn’t agree on a gold or silver facade for the looming towers, Mr. Bterrani says.

The architects wanted silver, the realistic color, while the developer opted for gold, as the towers took on that hue during sunset.

RJ Models ended up making one model in each. In the end, the developer—who was footing the bill—opted for the gold.

They often worked with Mr. Bterrani, who founded 3DR Models, on large projects and the three men decided to merge their businesses in 2006. “We were sick of competing with him,” Mr. Cheung says. 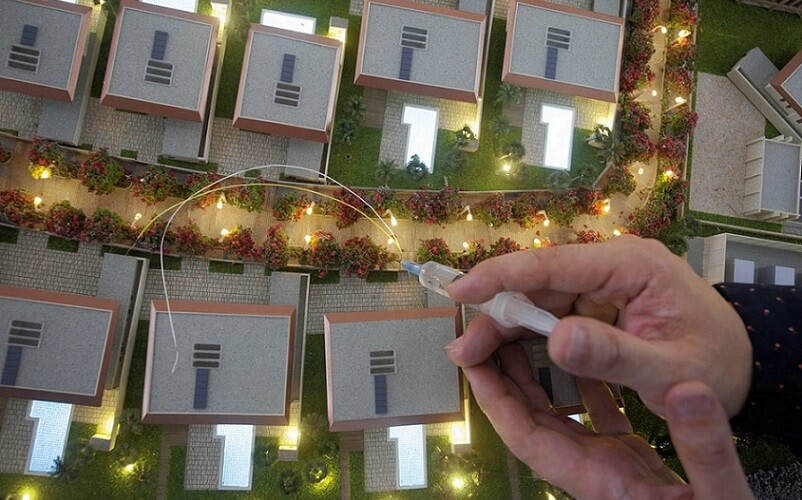 On the ground floor of the workshop, the three founders recently analyzed the ocean on a model of a current Dubai project.

After discovering a milky residue on part of the water, they told workers to redo it, making the ripples crystal clear.

“That way, when you put a boat on the water,” Mr. Bteranni says, “you’ll see a realistic shadow underneath it.”

Founded in 1995, Hong Kong, RJ Models specializes in making architectural models and has been servicing this industry for more than 20 years.

We collaborate with top-class designers worldwide. We strive to build the highest quality architectural models with the highest efficiency.

As the leader in the world-class architectural model making, RJ Models has attracted worldwide media coverage.

RJ Models turns your concept into a masterpiece.

3DR Models was established in 1989, is one of the leading model making companies worldwide.

As a professional model maker in U.A.E, 3DR Models located in Dubai and cooperate with RJ Models for more than 15 years.

3DR Models and RJ Models currently have 18% of the world’s model making’s market, occupying 12,800 square meters with over 500 in manpower, producing over 60 models per month.